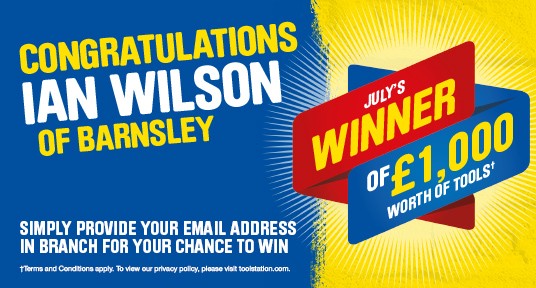 Congratulations to Ian Wilson, winner of our July “Welcome to Toolstation – win £1,000 worth of tools” monthly prize draw

Each month, customers that provide an email address when signing up at Toolstation will be entered into our monthly prize draw to win £1,000 worth of tools and supplies.

Ian is from Cheshire and is an antique dealer and also a property developer. As part of his property development business he can be working on big jobs, most recently converting two cottages into five apartments or working on a bit of everything on site. He refurbished an antiques centre into a collectables and antiques business and now combines the two roles.

There’s no such thing as a typical day for Ian, where he never knows what’s going to happen during his working day. He can generally be found fixing something in one of the properties he is working on and is also in the process of building his own house.

Ian has just recently become a Toolstation customer during a passing conversation with a Travis Perkins Merchant employee during a visit to their branch.

Ian says that this chance mentioning of Toolstation made him visit one of his local branches.

"I was looking for a specific product which my local Travis Perkins didn’t have at the time and the staff member serving asked if I had heard of Toolstation as they would likely have it. He explained that the two companies were part of the same group, so I took a look. I have used them a few times in the last couple of months, it’s useful to have an alternative place as well as my usual suppliers. We tend to be creatures of habit and always in a hurry so it’s good to be able to pick odd items up at somewhere like Toolstation."

Visiting Toolstation and providing an email address when he made his first purchase is how Ian won this prize. He has been able to stock up on tools to add to his kit; including a DeWalt drill, angle grinder, mixing paddles and a laser level.

If you want to be a winner of the "Welcome to Toolstation" prize draw, just like Ian, simply go to your nearest branch, provide your email address and you will be automatically entered into our monthly prize draw to win £1,000 worth of tools!

We will be drawing the winner at the end of each month, so keep an eye out for the winners on our Social Media and News Pages!