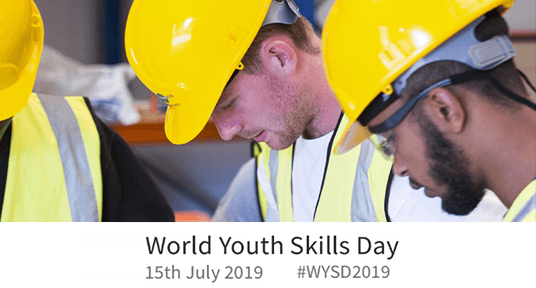 At Toolstation we like to support tradespeople and care about the future of those working within the industry. Since 15th July is World Youth Skills Day, we want to highlight the importance of helping young people to become the skilled workers of tomorrow. Finding the Skilled Tradespeople of the Future

Each month, customers that provide an email address when signing up at Toolstation will be entered into our monthly prize draw to win £1,000 worth of tools and supplies.

Finding the Skilled Tradespeople of the Future

When the United Nations launched World Youth Skills Day in 2015, its aims were to reduce youth unemployment and encourage training in the skills needed for economic growth. Many tradespeople consider taking on an apprentice to help with workload and grow their business. However, especially as a small business, they might be worried about managing a young person’s training, being able to pay them or the actual role they’ll be undertaking. These considerations can certainly start to put an employer off getting an apprentice.

On the other hand, many tradespeople started their working lives as apprentices and owe their success to the chance they were given. Howard Platts, General Manager of Youthbuild UK, a charity that Toolstation supports by being the prize sponsor at their annual awards, believes the next generation deserves a similar chance to learn relevant skills.

"Over 90% of applicants of the Young Builder of the Year Awards have been or are still apprentices. A significant proportion has progressed; going to university, becoming site managers, or construction professionals such as quantity surveyors. They have all made the most of the opportunities given to them.

Their lives have been transformed because an employer committed to taking them on as an apprentice. At Youthbuild UK we are aware that there are thousands of young people who could become valued employees, helping to form part of the skilled construction workforce that the industry needs. Many young people just need an opportunity to succeed; they just need that one person to give them a chance!"

This year, World Youth Skills Day wants to hear from young people who have been lucky enough to have had that life-changing chance. If you know an apprentice, or someone training in the trade, who would like to contribute a 1-minute selfie-style video on social media, point them towards the WorldSkills website worldskills.org

If you are an employer looking for assistance with taking on an apprentice, it’s worth contacting one of the ten shared apprenticeship schemes across the UK that support apprenticeships by removing some of the barriers for both employers and apprentices.

Anthony Rees works as a regional manager for one of these organisations, helping employers to provide positive skills development experiences for young people. Cyfle Building Skills, based in South West Wales, employs 120 apprentices which takes the stress out of the process for both the employer and the apprentice. He says parents and the education system are not doing enough to make young people aware of opportunities within the industry, instead favouring more traditional educational routes, and demonstrates the breadth and range for those taking up an apprenticeship.

"Cyfle courses run for three years. The first year is spent in full time education and the next two in work experience roles, including in trades such as electrical, plumbing, carpentry, painting and decorating. We now have technical apprenticeships, which are focused on routes into management. The apprentices get to move around and work on various projects to develop the skills that they are learning"

Finding the right support can make the process of training the next generation of tradespeople far less daunting and help you make the most of having another pair of hands. Perhaps World Youth Skills Day is the right time to start thinking about how your business could benefit from an apprentice.

For more information on Youthbuild UK and Cyfle and the work they do: